The SFO is required under Section 149 of the Equality Act 2010 (the Public sector Equality Duty) and the Equality Act 2010 (Specific Duties) Regulations 2011 to publish information that demonstrates our compliance with the general equality duty with regard to age, disability, ethnicity and gender. In addition to these statutory categories, we also monitor our workforce with regard to religious belief, sexual orientation, and part-time working.

Structure of the report

This document provides summary profiles of our workforce by ethnicity, gender, religious belief, age, sexual orientation, disability and part-time workers as at 31 March 2020.

In publishing Diversity data, the SFO is mindful of the need to ensure that we comply with ONS guidelines and Civil Service best practice guidance on the monitoring of equality and diversity in employment. These guidelines prevent us from publishing any data which runs the risk of disclosing an individual’s personal sensitive information. This is defined as any data where the numbers are less than 5.

The data is therefore presented as percentages to ensure that publication does not run the risk of disclosing an individual’s personal sensitive information. By publishing the data in percentage terms we are able to make comparisons in relation to all the areas covered, between the proportion of each demographic in the total workforce and the proportion being promoted and rewarded. For example, our data shows that staff declaring themselves as BME make up 17% of the total SFO workforce and that 16% of those receiving an Annual Bonus were from a BME background.

We ask all our employees to use our on-line self-service HR system to tell us their disability status, their ethnicity, their religion or belief and their sexual orientation. For each of these areas they have the option of ‘Prefer not to say’. This option is combined with blank fields and are shown as Not known in the charts. As at 31 March 2020, the percentage of Unknown data ranged between 27% - 31% of the total. This is an improvement on previous years due in part to an exercise to improve the voluntary declaration rate that was undertaken in Nov 2018 and also following changes and improvements made to the collection rate via the on-boarding process for new recruits.

The SFO recognises the need to increase employee diversity data through self reporting and we have an ongoing campaign to raise awareness amongst employees, including messages supported by our Board level Diversity Champions.

A set of pie charts are attached to this report to help illustrate the following points.

The percentage of declared BME staff now stands at 17% - an increase on previous years, which is partly down to an improvement of recorded data (now reduced to 29% unknown) but also a significant increase in the number of Asian staff (now at 40, up from 28). The figure now compares well with the UK civil service figure of 13.2%[1] (which also has 19% not declared/reported). 21% of new starters to the SFO declared as BME , and just 17% remain unknown (a continued significant improvement on the 73% and 43% that remained unknown from the starters in the previous two years’).   BME staff received 12% of in-year bonuses and 19% of Outstanding assessments went to BME staff.  Statistically BME staff equally likely to receive a Temporary Promotion (19%), or to be permanently promoted (20based on activity in the reporting period.

The percentage of unknown respondents has decreased since the previous year and is now at 35%, which is due to increased amount of data being received from new starters. However the overall figures for declared individual religions are mostly similar to 2019.

The SFO’s workforce remains fairly evenly split in the main age groups, but as for last year the age group 25-34 supplies a third of new starters. .

Declaration rates for LGBT staff have increased over the last 12 months, and 4.8% declare as LGBT which compares well with a Civil Service figure of 4.4% (2020 figure).

The declaration rate of 3.7% is an increase from the previous year, but remains well below the civil service level of 12.8% 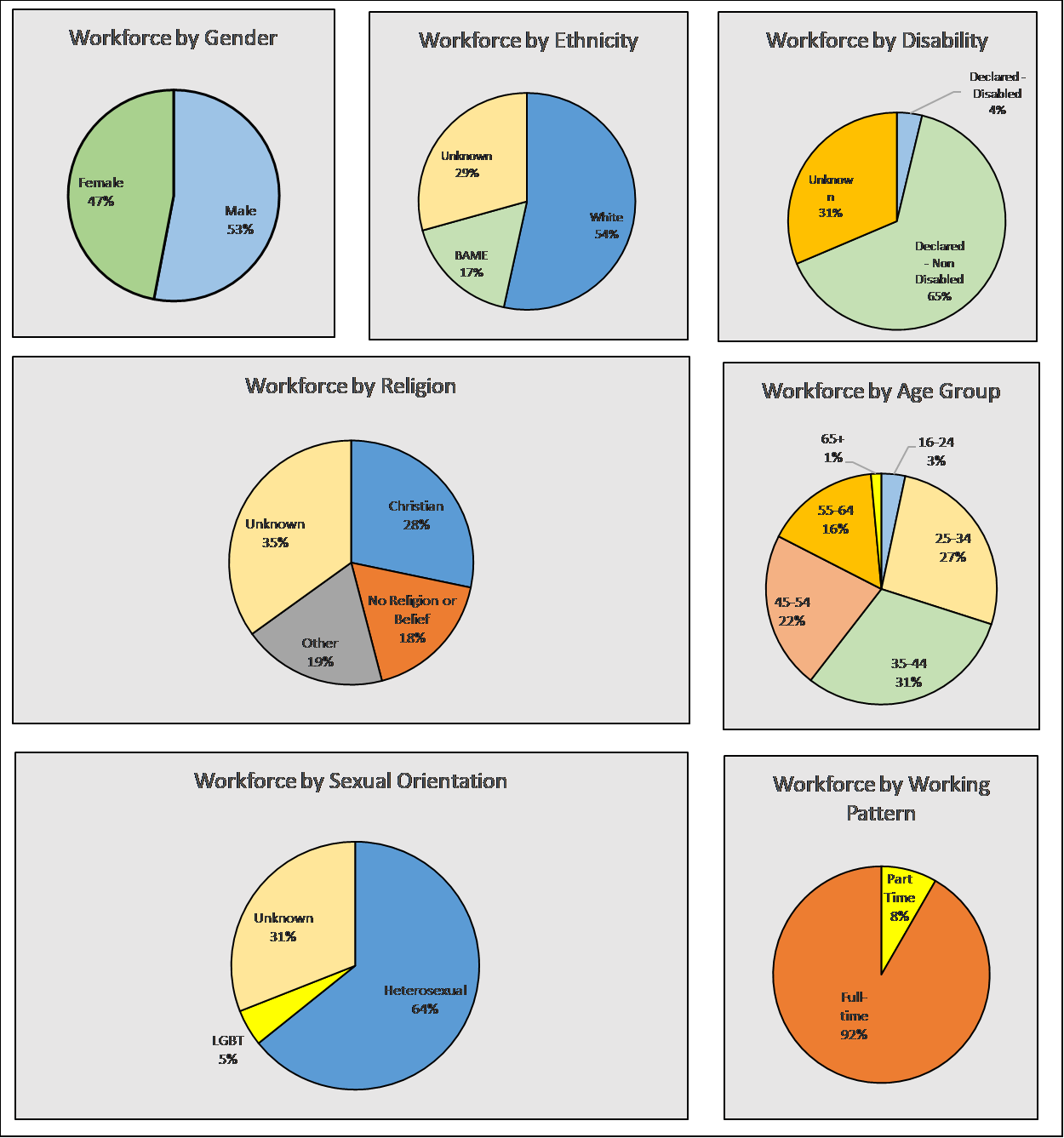 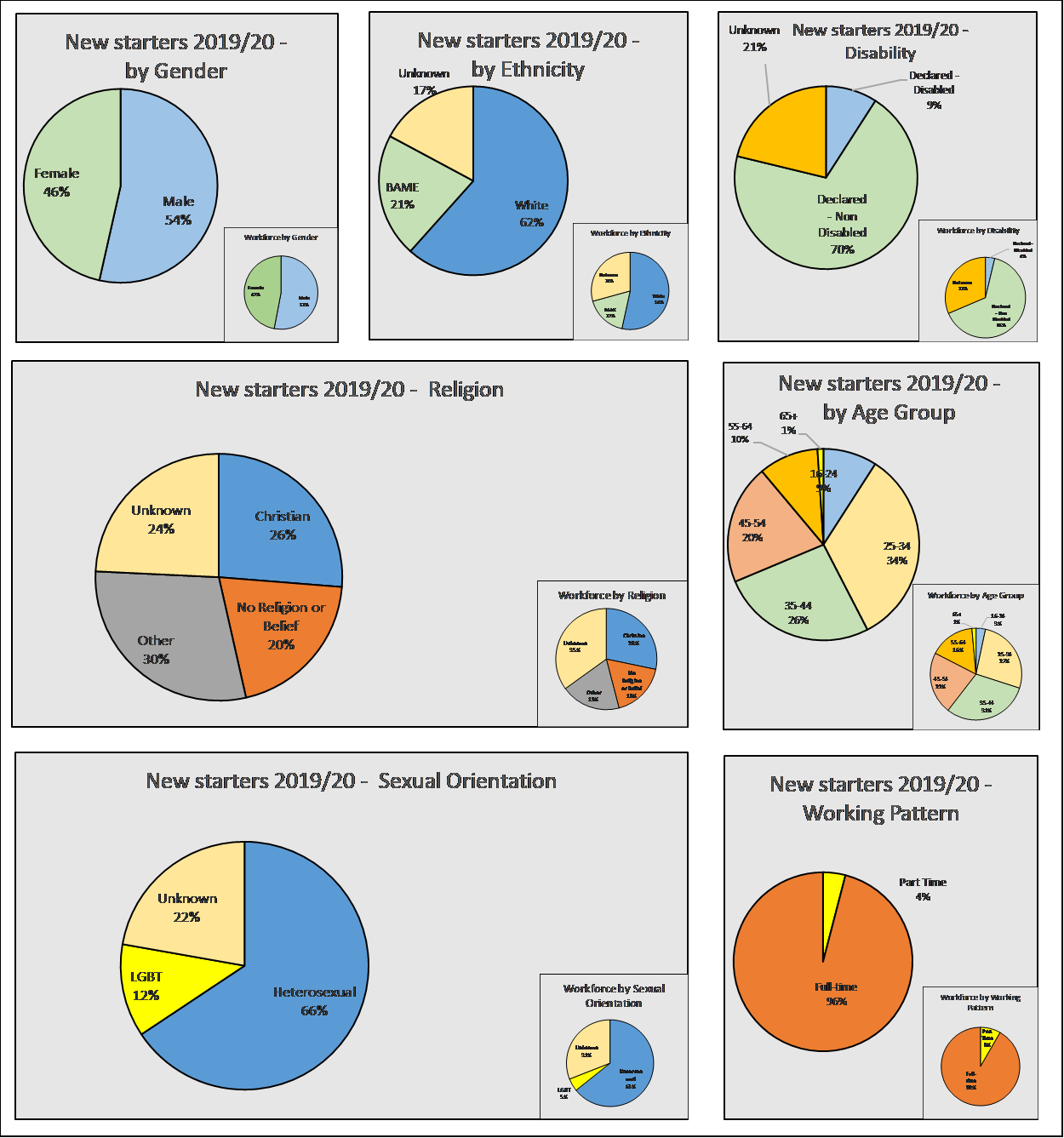 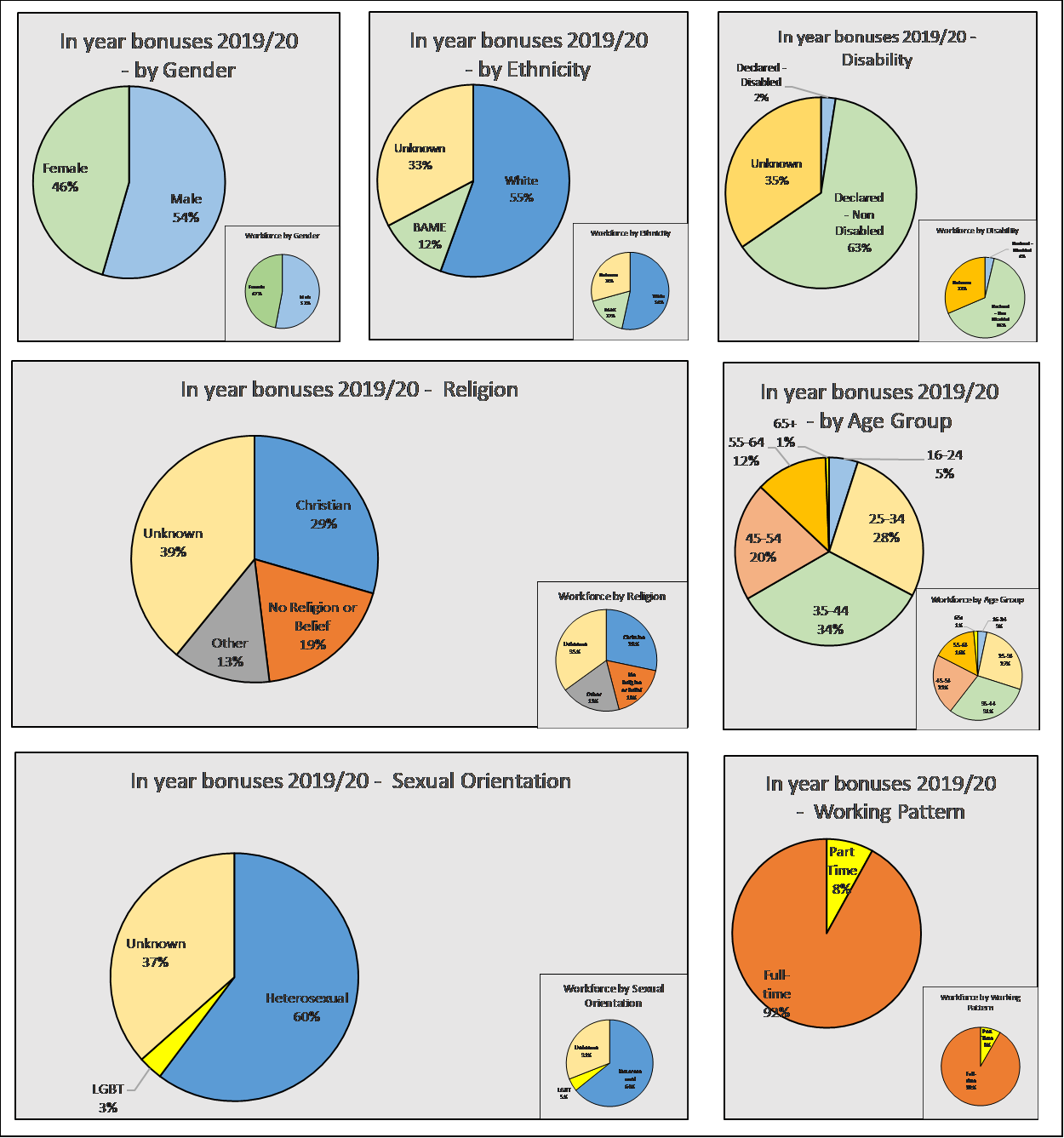 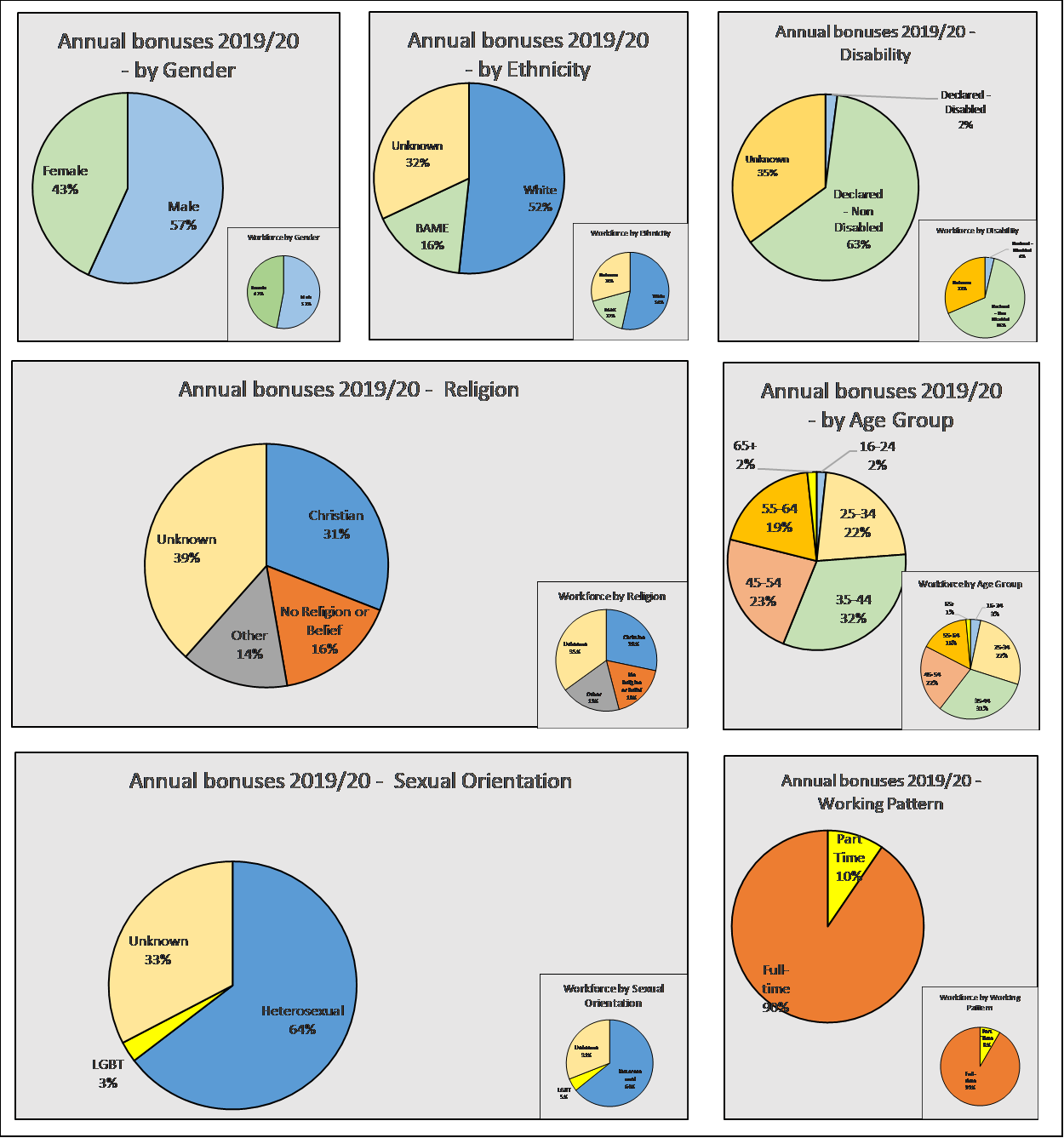 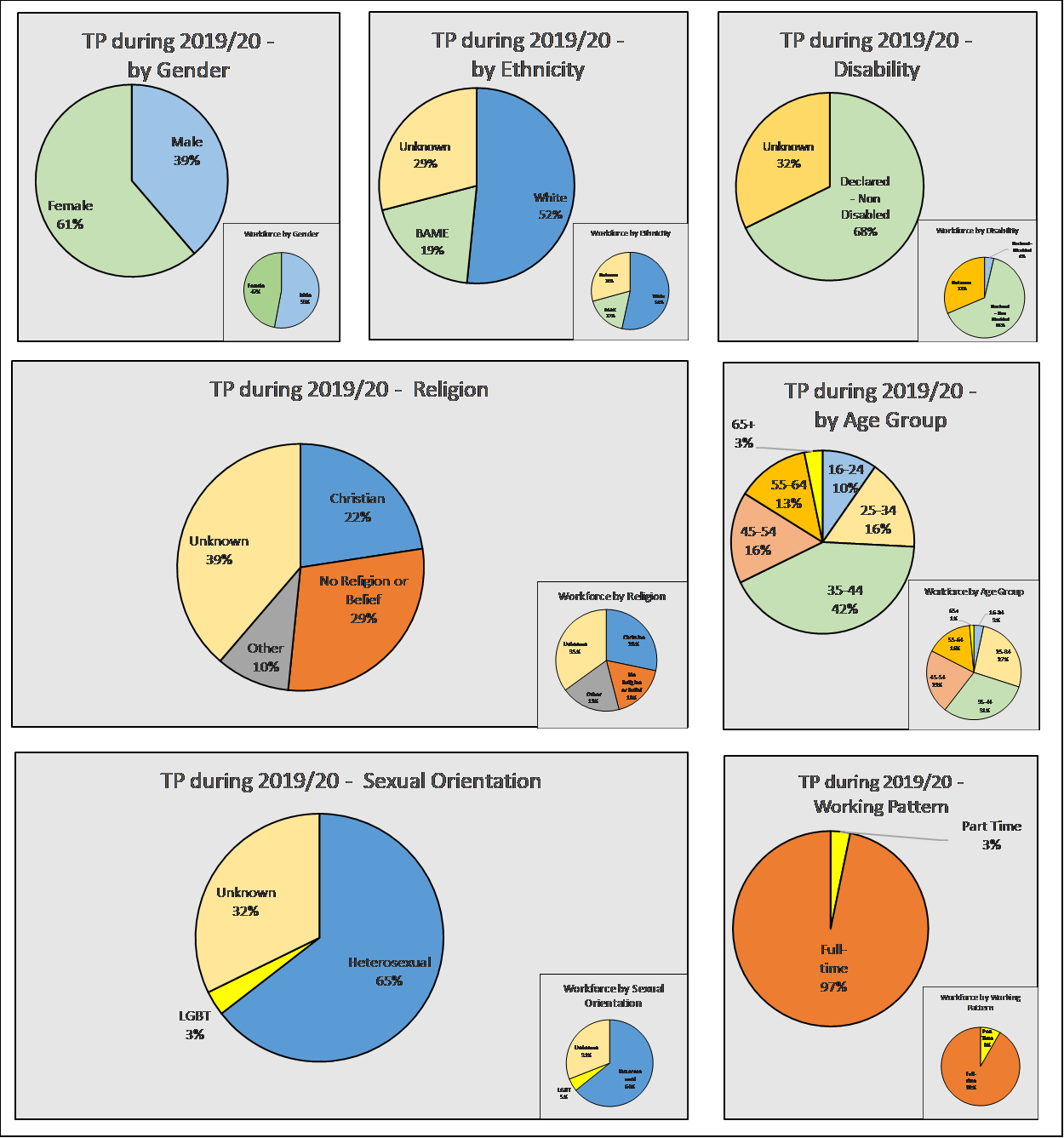 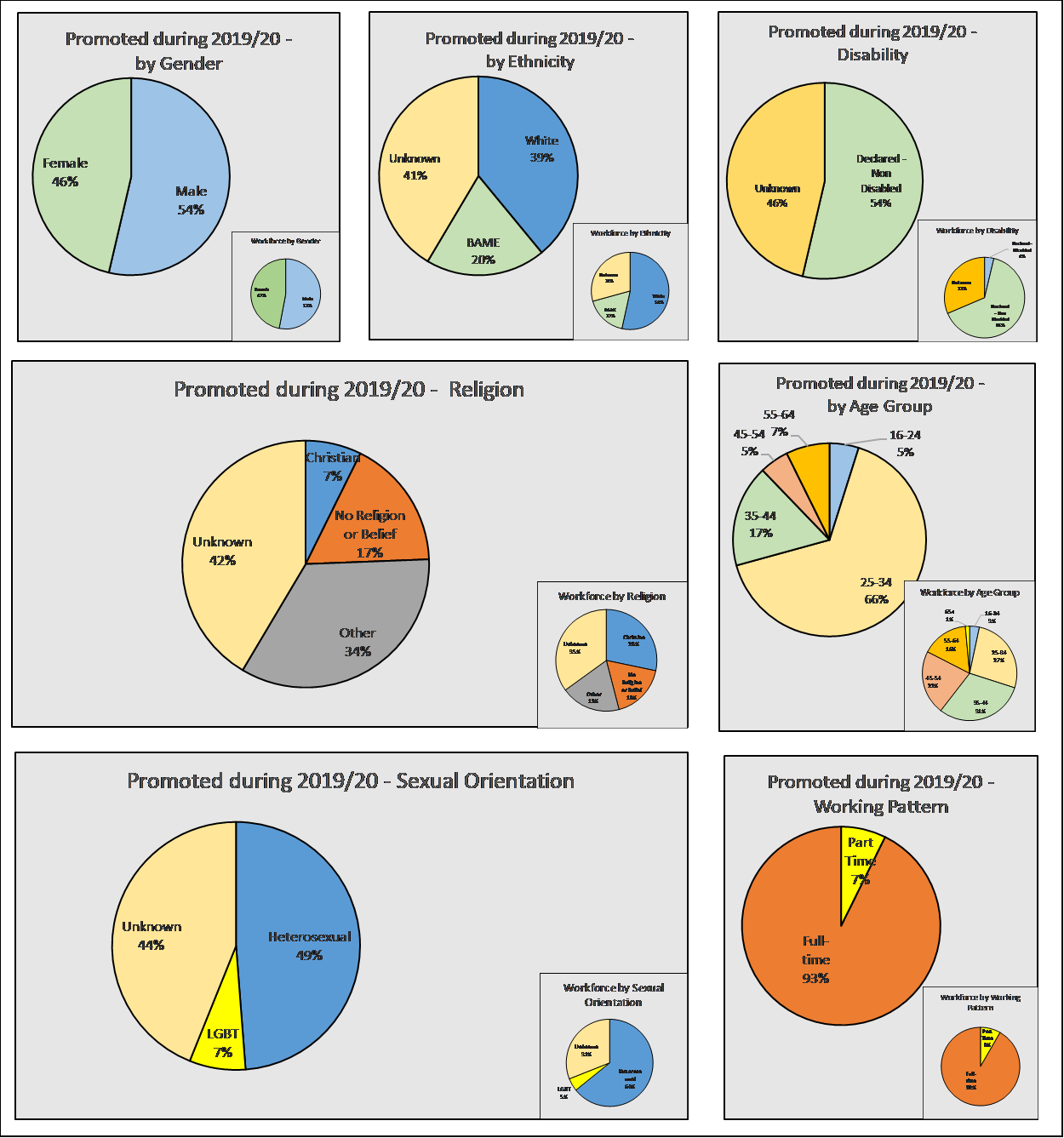