Additionally, Jack Harper was found guilty of 2 charges linked to attempts to defraud a single college a year later.

The convictions follow guilty pleas by Christopher Martin and Steven Gooding before the start of the trial last year.

Together the men ran Luis Michael Training Ltd which fraudulently obtained around £5m of public funds, earmarked by the Skills Funding Agency to create apprenticeships for vulnerable young people.

Approaching further education colleges as a subcontractor, Luis Michael Training claimed it would provide training services to create football coaching apprenticeships for young people. Instead, the company set about creating a fraudulent scheme.

From its launch in 2009 and throughout its operation Luis Michael Training Ltd provided apprentices with little, if any, of the required training to qualify as football coaches and even signed up ‘ghost learners’, stealing identities to create apprentices out of thin air.

The company took every step to appear legitimate, even obtaining endorsements from former football stars such as Ian Rush, relying on their reputation to convince colleges, football clubs and apprentices that their scheme was genuine.

Thousands of vulnerable young people became victims of the fraud. Cheated out of proper training through the bogus apprenticeship scheme, most never received the qualifications they had signed up for, nor the football coaching jobs promised. Sixth formers on work experience were even co-opted into the scam, tasked with filling out assessment tests in the names of apparent apprentices so Luis Michael Training could show colleges that their ‘students’ were meeting scheme requirements.

“These men fraudulently diverted taxpayers’ money away from schemes which were intended to transform young people’s lives. Instead, their apprenticeship programme was a sham.”

Under the Skills Funding Agency apprenticeship scheme, Luis Michael Training would receive payments for apprentices placed with an employer who met the eligibility requirements. The company instead bypassed requirements, forging paperwork and financial statements to siphon off education funding.

Following his involvement with Luis Michael Training, Jack Harper, trading as Football Qualifications.com started his own fraudulent scheme and attempted to partner with Liverpool Community College to provide apprenticeship training. Audit checks carried out by the college revealed that the initial cohort of learners was ineligible for apprenticeship funding, with false documents provided to the college to convince them that the learners were in employment.

Sentencing is due to take place on 26 February 2018, at Southwark Crown Court. 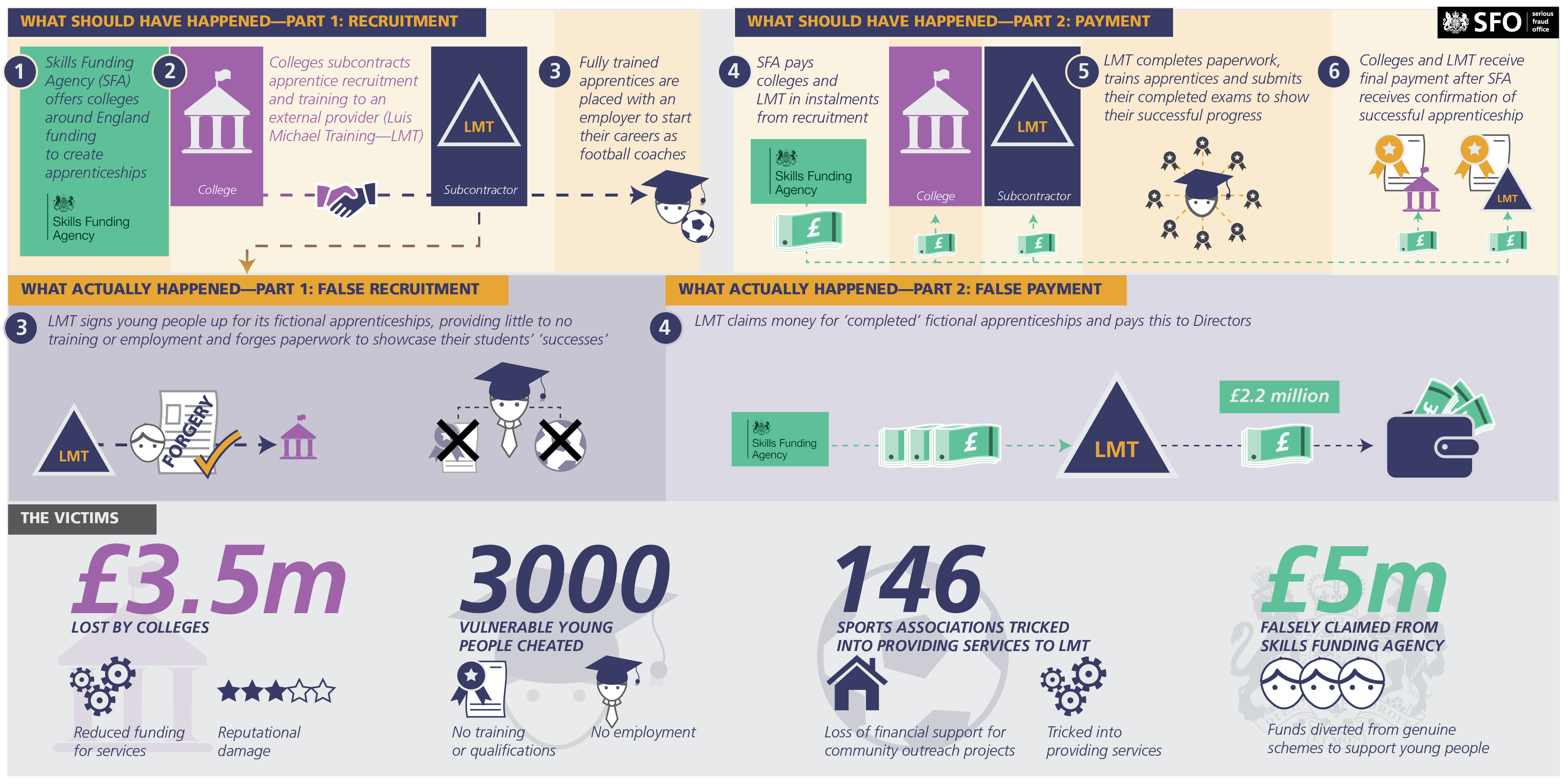