Alstom Network UK Ltd has today been ordered to pay a total of £16.4 million for conspiracy to corrupt relating to a contract to supply trams in Tunisia. This sentence comprises £15 million in fines and £1.4 million in costs.

The company was convicted in April 2018 of conspiracy to corrupt, having paid an intermediary called Construction et Gestion Nevco Inc. (Nevco) €2.4 million to secure an €79.9 million contract with Transtu, the company responsible for running the Tunis Metro. To satisfy internal compliance checks and make its agreement with Nevco appear a legitimate contract for services, Alstom helped to produce paperwork as ‘evidence’ of services rendered. In reality, Nevco was simply a conduit for bribes. This was acknowledged by Alstom Network UK itself when it decided not to make a final payment of €240,000 in its original €2.64m contract.

Graham Hill, Robert Hallett and Alstom Network UK were acquitted in the same trial of alleged corruption in relation to transport contracts in India and Poland.

This sentence marks the end of the SFO’s Alstom case, which has seen three individuals, Alstom Network UK Ltd and Alstom Power Ltd convicted of conspiracy to corrupt.

“This sentencing brings to an end a case which involved cooperation from over 30 countries and concerned conduct across Europe and beyond.

“It shows that we will work tirelessly with law enforcement around the world to root out bribery and corruption.”

The SFO’s wide-ranging investigation arose from the actions of Alstom subsidiaries in power and transport projects in Europe and around the world. In addition to the conviction of Alstom Network UK Ltd for bribery in relation to the Tunisian contract, John Venskus, Göran Wikström and Alstom Power Ltd pleaded guilty to bribing senior Lithuanian figures in order to win contracts to upgrade and refit a power station, the Lithuanian Power Plant (LPP), with tenders invited by the European Bank of Reconstruction and Development. Alstom Group companies paid over €5 million in bribes to secure the €240 million contract. As with the Tunisian conduct, papers were falsified to circumvent checks put in place to prevent bribery by Alstom staff responsible for preventing corruption.

Alstom Network UK and three more individuals – Michael Anderson, Jean-Daniel Lainé and Terrence Watson – were also charged in relation to allegations of bribery over a €229 million contract to provide rolling stock for the Budapest Metro System. All defendants were acquitted by a jury in November 2018. 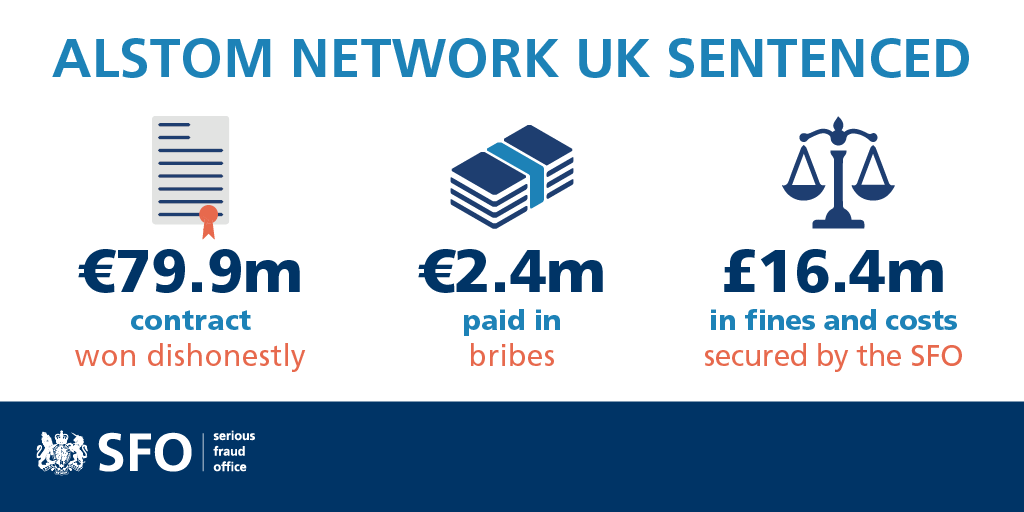