You are here: SFO > Case Updates > SFO enters into €991m Deferred Prosecution Agreement with Airbus as part of a €3.6bn global resolution

SFO enters into €991m Deferred Prosecution Agreement with Airbus as part of a €3.6bn global resolution

Under the terms of the DPA, Airbus SE agrees to pay a fine and costs amounting to €991m here in the UK, and in total, €3.6bn as part the world’s largest global resolution for bribery, involving authorities in France and the United States.

The announcement comes a little under four years after the SFO began investigating the company over allegations that it had used external consultants to bribe customers to buy its civilian and military aircrafts.

The indictment, which has been suspended for the term of the DPA, covers five counts of failure to prevent bribery. The conduct involves Airbus’ Commercial and Defence & Space divisions. The conduct covered by the UK DPA took place across five jurisdictions: Sri Lanka, Malaysia, Indonesia, Taiwan and Ghana between 2011 and 2015.

The Judge ruled today in a public hearing at the Royal Courts of Justice that the total sum (€983.97m plus the SFO’s costs of €6.9m) reflected the gravity of the conduct, the full cooperation of Airbus SE in the investigation, and the programme of corporate reform and compliance put in place by new leadership at the top of the company.

As part of the DPA, the company has agreed to full cooperation with the SFO and its law enforcement partners in any future investigations and prosecutions, and disclosure of any subsequent wrongdoing by the company or its employees, subject to applicable laws. If the company does not honour the conditions of the DPA the prosecution may resume.

Airbus SE has also reached a Convention Judiciaire d’Intérêt Public with the Parquet National Financier (PNF) and a Deferred Prosecution Agreement with the US Department of Justice and US Department of State today. In total, these agreements together with the SFO DPA require Airbus SE to pay approximately €3.6 billion (including €2,083,137,455 to the PNF and €525,655,000 to the US authorities) at the exchange rate at time of payment.

“The seriousness of the criminality in this case hardly needs to be spelled out. As is acknowledged on all sides, it was grave. The conduct took place over many years. It is no exaggeration to describe the investigation it gave rise to as worldwide, extending into every continent in which Airbus operates. The number of countries subject to intense criminal investigation by the various agencies, and the scale and scope of the wrongdoing disclosed in the Statement of Facts demonstrate that bribery was to the extent indicated, endemic in two core business areas within Airbus.”

“Airbus paid bribes through agents around the world to stack the decks in its favour and win contracts around the globe. Corruption like this undermines free trade and fair development and it is to Airbus’s credit that it has admitted its culpability, cleaned its house and come forward to put this conduct to bed.

“A resolution of this scope would not have been possible without the commitment, determination and hard work of SFO staff and our French and American colleagues.  We are also indebted to law-enforcement partners around the world for the support they provided in securing this record-breaking resolution.”

The SFO investigation remains active and the position in relation to individuals is being considered. 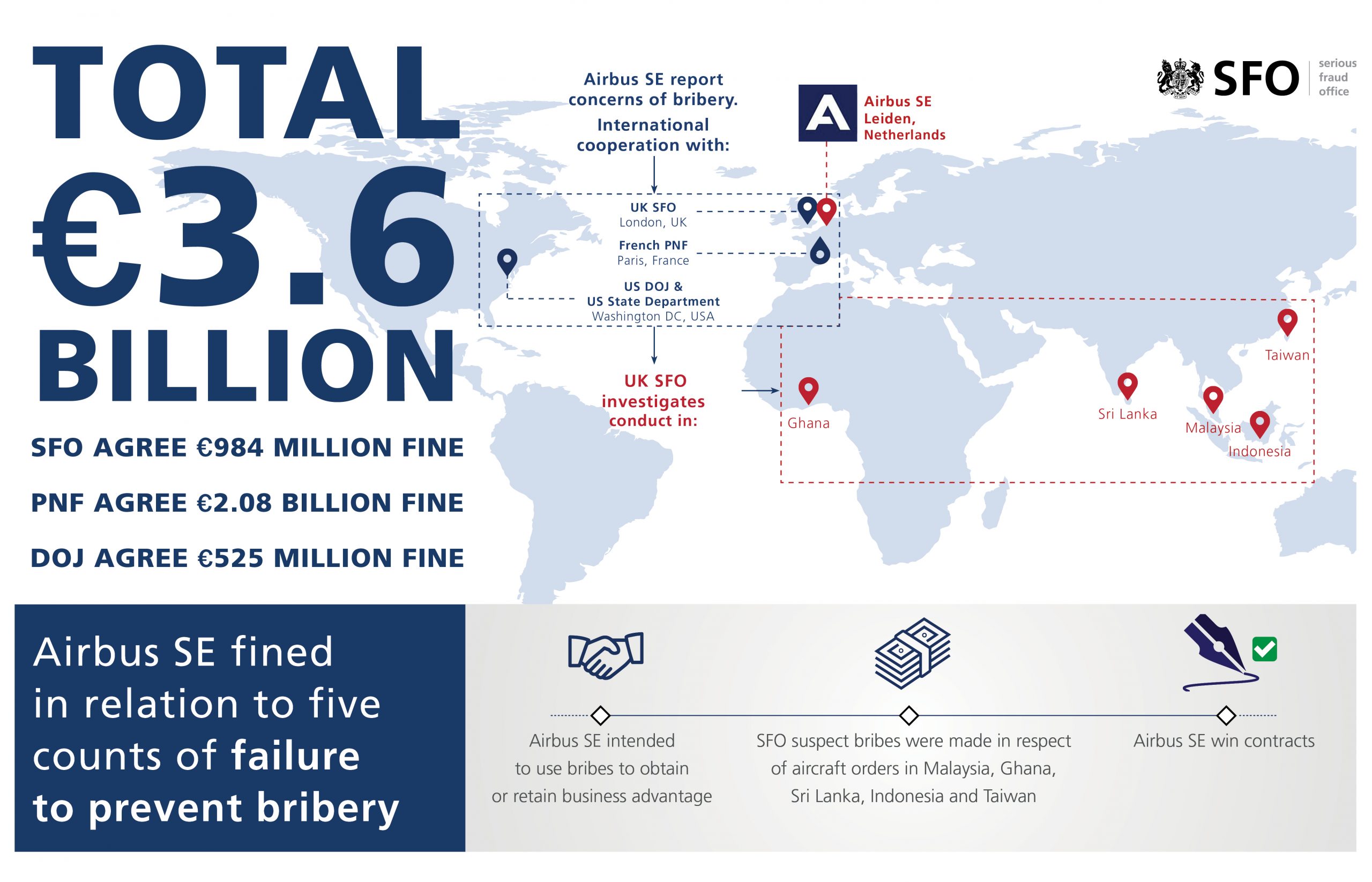